Amy Larkin nails it when she says “no nature, no business”. Business as usual is killing the earth. The evidence is overwhelming. Learn more at Science Direct’s Environmental Externality.

From 2005: The recent article in Wired

I presented at the global earth repair conference in Port Townsend, Washington earlier this month. The event was certainly groundbreaking with some six-hundred attendees and over sixty presentations. The conference was not a scientific conference and while there was a good deal of sound information based on well understood and proven practices, there was  also some information presented which was notably disturbing.

Some speakers were ridiculing current scientific consensus on the necessity of bringing down atmospheric CO2 levels and instead were advocating for altering the earth’s hydrologic cycle through ecosystem restoration as the most important task in face of the present climate emergency. This theory is controversial at best and I am not aware of any peer-reviewed science supporting this theory and in fact there exist cogent arguments disputing this notion.

On May 9-10, 2019 I attended the 40th year reunion of the Farallones Institute seeing friends some of which I had not seen in well over thirty years. The Institute was an amazing place founded on a vision for how best to participate in the growing ecological movement of the 1970s. It’s an amazing story really, too long to tell here, but I’ll include some pics and links here so readers can get an idea.

What today is known as the Occidental Arts & Ecology Center (OAEC) in Occidental, California started out as the Farallones Institute some 40 years ago. I was fortunate to live and work at the Institute in the mid-eighties, both as the last caretaker/tour guide of their Integral Urban House on 5th street in Berkeley, California and also at what we then called ‘the rural center’ which is where OAEC now exists.

The Farallones Institute started with an idea of a few folks and for more than two decades went on to make its mark on society and the world, ranging from becoming the place where the organic vegetables for Alice Water’s Chez Panisse were first grown, to demonstrating urban-self reliance in the city, and from first using the internet to link environmental and appropriate technology organizations globally (ECONET), to training Peace Corps volunteers before their overseas assignments.

The work at the Integral Urban House became a best selling book and was for a time the appropriate technology sourcebook of its day. The house was world famous. I can vouch for this personally as I gave tours to people from all over the world who made their way there.

While working for the Farallones Institute I became head of the ECONET project which became a significant early pilot in the use of the internet, years before the invention of the web browser. Because of ECONET I had the good fortune of meeting many of the pioneers of the personal computer and internet revolution including Douglas Engelbart, Jacques Vallee, Lee Felsenstein, Stewart Brand and Tom Jennings. My work with ECONET led to a career in telecomputing which lasted many years. 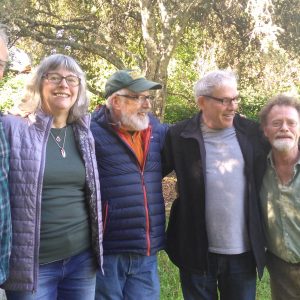 do great work throughout the world. At the reunion a few of us discussed uniting our shared vision of an ecological world contemporary with our times and manifesting that in a meaningful way. We’ll see!